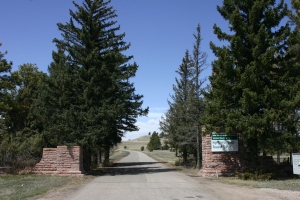 Okay, I admit, I’ve heard Scott Skogerboe (Fort Collins Wholesale Nursery) talk about the Cheyenne Experiment Station for many years, but had never taken the time to see it for myself. Last week I was giving a talk in Casper, WY, so stopped by the Station on my way up. It was a beautiful day (sunny & breezy, not windy!), and I had the place all to myself. I had seen pictures online and at Scott’s talks, but nothing prepared me for the pure joy of seeing these 80 year old survivors of this rugged environment. It was more like seeing long-lost friends, I knew all their names, and now had the pleasure of meeting them in person. 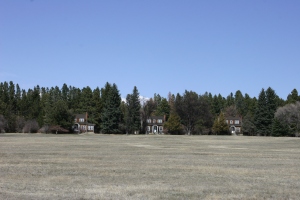 The Station was appointed as a  USDA Experiment Station in 1928 to focus on horticultural crops for the high plains. Thousands of plants were trialed, and many important crops came out of this station: Fort Laramie strawberries, hardy chrusanthemums, and much, much more.

But in 1974 the Station was closed. Plants were left to survive on their own, having to put up with wind, cold, drought, more wind, more cold, and overall neglect.

Twenty years later the Station was “re-commissioned” as the High Plains Grasslands Research Station with a new focus on grassland research. The 60+ year old shrubs and trees were once again cared for, but only on a need-to-survive basis.

In 2000 a group was formed, the “Friends of the High Plains Arboretum,” associated with the Cheyenne Botanic Gardens. They were concerned about the future health of the many woody plants still alive at the research station, and wanted to raise funds and awareness about this incredible regional resource. This group was composed of diverse members of the region and community including: the Cheyenne Botanic Gardens, the Laramie County Conservation District, the Cheyenne Urban Forestry Division, State of Wyoming Forestry Division, University of Wyoming, Colorado State University, folks from the local and regional green industry, historians and other interested community members. They were also joined by employees of the USDA/ARS High Plains Grasslands Research Station. This group now maintains 62 acres within the original station.

From a Plant Select® standpoint, I was thrilled to have the chance to see the original shrubs and trees that have made their way to horticulture and are now part of our program: Cheyenne® mockorange, apache plume, Blue Velvet® honeysuckle, and Russian hawthorn. Others that impressed me with their winter beauty and vigor were wavyleaf oak, dwarf Russian almond (not surprising how hardy these Russian plants are!), Cheyenne lilac, Cheyenne privet, Kentucky coffeetree, wafer ash, and so many more.

I plan  to go back in the summertime to catch them at their finest.

If you’d like to read more about the station, here are the two best sites:
Official USDA site info
High Plains Arboretum

The Arboretum is open 8:00 am to 6:00 pm daily. Be sure to stop by the Cheyenne Botanic Gardens on the way. They have a fabulous facility (more later) and offer maps and directions to the Arboretum.

4 Responses to The holy land of high plains horticulture